Effective attraction at the POS

There’s a boom in the world of interior design; a renaissance in the use of natural aesthetics, which puts materials like stone, concrete and wood front and centre stage. That consumers are increasingly looking for natural style, modernity and cosiness, was a clear indicator for Scheurich that an expanded indoor-nature concept was needed to generate turnover at the POS. As a result, Scheurich now presents an attractive new series, as well as numerous additions to those already existing, thereby expanding the nature-concept product range to more than 70 items. With this unique variety of shapes, surface textures and designs, Scheurich assumes a leading position in the market.

Among the new products is the cover-pot series Linara, its softly rounded shape and hand-made look will leave you amazed. Natural surfaces and earthy designs emphasise its unique character. The popular concrete look has already been picked up by Scheurich with Roca, but now the company takes the next step and presents two new variants of these cover-pots with their fascinating surface structure. The Stone family is also growing; two new versions are based on mineral colours just like the other items in the series and look authentic because of their stone structure.

The nature concept of course benefits from the high-value features that are associated with Scheurich products; a perfect fit for common containers as well as being top-quality “Made in Germany”. These pots are also one hundred percent watertight which is a decisive sales argument. Pots by Scheurich can be used anywhere, even on high-maintenance wooden furniture. This sets them apart from many commonly found alternative containers that feature the nature style, but which do not meet these minimum standards. 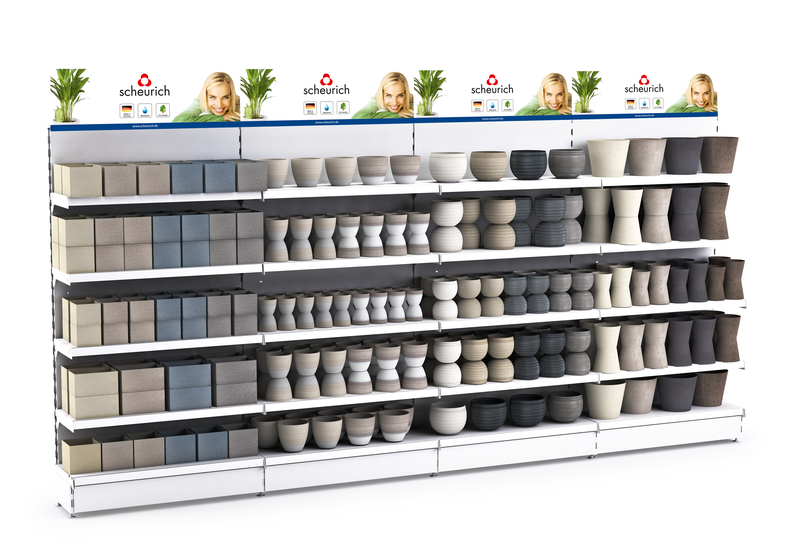