Kleinheubach: During a cheerful celebration the ceramics manufacturer from Kleinheubach, Germany, has honoured their employees’ jubilees, their recent retirees as well as apprenticeship graduates.

CEO Ulrich Frank told the story of the year 1973, when the employees started working at Scheurich. The look back made it clear that those 45 years were characterised by many changes. A constant throughout was the high commitment, adeptness and loyalty displayed by the employees, who are undoubtedly the backbone of Scheurich. Reinhard Birven and Peter Baumann joined Frank’s praises and thanked the employees for their continued loyalty, their readiness and motivation to work for the company Scheurich.

Honoured for 45 years of work were: Walter Difloe, Margareta Bauer and Friedbert Zink. For 40 years: Ulrike Hornich, Norbert Reichl and Cosimo Morrone. For 35 years: Claudia Arnheiter and Thomas Tessier. For 30 yeary: Markus Jäger and Annette Schmidt. For 25 of staff membership Anne Ketzler, Bianca Kreß and Johann Drotleff were honoured and for 20 years at Scheurich Jordanis Kalafatis, Alexander Jakob, Olga Hill and Bernd Broßler. Also honoured were recent retirees. Among others, one now former employee was honoured for  42 years, two for 43, respectively, and another for 45 years at Scheurich. Applauded for their recent graduation were Sebastian Wiesner and Marius Berberich. Erika Lala, Armin Wirth, Winfried Mengler, Walter Difloe and Cosimo Ciraci were seen off into their well earned retirement.

The picture shows the long-term employees, new retirees and graduates joined by the CEOs Reinhard Birven and Ulrich Frank as well as the head of the advisory board Peter Baumann and the head of the working council Martin Bork. 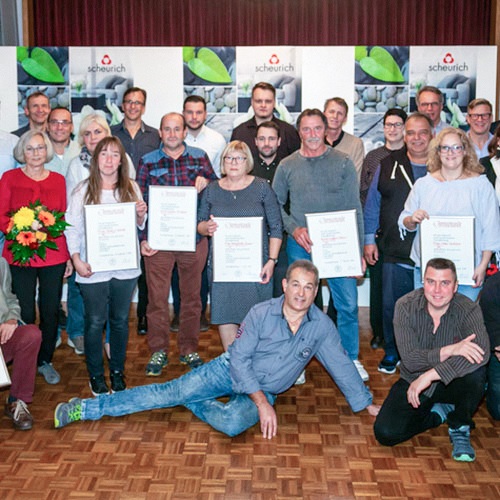